Rich recently paid us a visit. He actually used to live in Hotel Dunsmuir as a teenager, from 1968 to 1979. His Dad, John DeChaine purchased the hotel about 1962. His family didn't move in until 1968. Rich spoke fondly of his teenage years in Dunsmuir and all of the wonderful adventures he had. 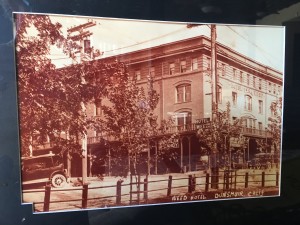 I was thrilled to be able to give Rich a tour our our "Grand Old Dame", he told me that he was not allowed in the rooms as a teen. His job was to vacuum the corridors! The delight on his face at being able to see the suites was a joy to witness.

He provided wonderful insights into the goings on of those days. He said that Sir Thomas, who had relocated to Dunsmuir, painted the mural of Mount Shasta on the front retaining wall. Many people complained that one of the tree tops was bent over. When asked why he painted it that way, Sir Thomas replied that it was for the buzzard to perch on. (Photo of the mural is displayed in the hotel lobby.)

There is another old photo in the lobby showing the front of the hotel and a black car, Rich said the car was a 1968 Cadillac belonging to his Dad, it was his Dad's pride and joy.

Rich also spoke fondly of the "Cabaret Room." It used to be called the "Tobogan Room", as there were Tobogans hanging from the ceiling. In that same room his Dad built a round stage which was very cutting edge for those times - to accommodate the dances and performances.

The original Dunsmuir telephone switch board is still in our lobby. Rich told me that it had been just inside the front desk when he was a teen. In those days they also sold candy at the front desk.

The current recycling station used to be the phone booth; if only those old walls could talk!

Rich was not allowed into the bar as a teenager, however he remembers local teens coming in through a circular window and "relocating" the hard liquor. One mothers response to a phone call from John about the incident was to say that for a sum of money the liquor could be returned. Rich didn't know if his Dad agreed to that request or not.

Rich has promised to come back for an extended visit and to bring us some old photos of his days here. Anticipating his visit and photos soon.